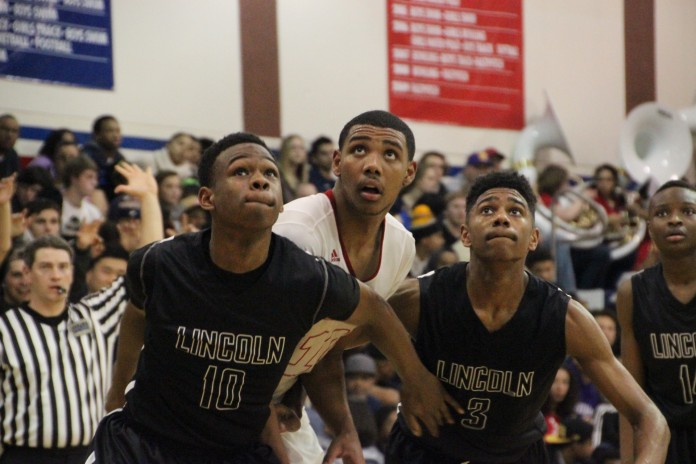 When talent, experience and potential intersect in athletics, expect good things to follow.

Twenty-three days after falling 55-54 to Wilson High School at home, the Lincoln High School boys returned the favor Friday night, as the Abes defeated the Rams 67-59 in front of a standing room only crowd inside the WHS gymnasium.  Through their high pressure defense and relentless pursuit on the offensive and defensive glass, the Abes were able to overcome an eight point deficit at half-time to end up pulling away in the final minutes.

The victory moves Lincoln (15-2) into a tie with Wilson (16-2) atop the 3A Narrows League standings, with the season split representing the only league loss for either team.

Armed with a roster full of young and experienced talent, Lincoln defeated two of the top teams in the state regardless of classification in January.  On Monday, Jan. 20, Lincoln defeated 4A powerhouse Jackson 62-55, a game won by the Abes in similar fashion as their victory on Friday night.

Down 60-51 with less than two minutes to play, Wilson cut the lead to five following a three pointer from junior point guard Ivy Smith.  After Justice Martion split a pair of free throws to give Lincoln a 63-57 lead, Ram senior wing Jamal Welch’s three pointer hit short off the front of the rim, leading to a fast break opportunity for the Abes.

Martion, a 6’6″ senior post, found himself with the ball and a wide open lane to the basket.

In what turned out to be the highlight of the night, the south-paw appropriately threw down a monstrous left handed dunk, sending the Abe bench and the fans behind it into hysterics.

Lincoln Senior guard Ahmaad Rorie grew stronger as the game went on and the University of California-Berkeley signee was able to finish near the rim and knock down perimeter jumpers alike in the second half.

The pressure from Lincoln guards Josiah Barsh (Jr.), Londrell Hamilton (Fr.), and Trevion Brown (So.) helped Lincoln go on a scoring run beginning at around the six minute mark in the third quarter.  After falling behind 32-26 with 7:09 remaining in the 3rd, Lincoln would go on a 19-5 spurt to take a 45-40 lead into the fourth quarter.

Early on in the contest, it was Wilson who applied flustering defensive pressure and timely shooting, pushing the Rams out to a 19-10 lead after one quarter.   However, poor shooting at the free throw line coupled with Lincoln’s resiliency to get to the basket proved too much for Wilson to overcome.

Welch, one of three Wilson seniors playing in their final home game, Alphonso Anderson (So.), guard David Jenkins (So.) and Smith were the major offensive contributors for the Rams.  All season long, Wilson has relied on a balanced scoring attack and the Rams will look to regroup heading into the final two weeks of regular season play.

Both schools are ranked within the top four of various 3A state rankings and are expected to be present at next month’s WIAA State Tournament in the Tacoma Dome.