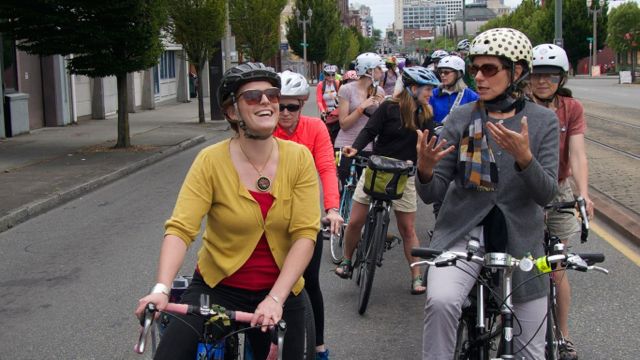 Cycling is, and has always been, a very male-dominated activity. However, as cycling becomes a more popular mode of transportation and form of recreation across the Pacific Northwest and beyond, one group of Tacoma women is aiming to change that. Having just celebrated their one year anniversary, VeloFemmes is a women’s-only cycling group providing women of all cycling skill levels a place to ride alongside fellow females.

VeloFemmes got its start after a group of female bike commuters decided to come together and take part in the CycloFemme Global Women’s Cycling Day. The 15 women who participated in the event recognized that there was a need for a women’s cycling group in Tacoma and decided to form one of their own.

Carina Liljengren is a longtime Tacoma bike commuter and one of the women behind VeloFemmes. Liljengren says that after the CycloFemme event, VeloFemmes (meaning “female cyclists” in French) formed and decided to plan their first bike ride in June of 2013. “We just tried to put it out there and see what would happen. We ended up having 35 people at the first event. It was raining sideways, but people were still really excited about it and asked what would be next,” says Liljengren. After the success of the first event, VeloFemmes got to work planning out their cycling calendar for the year, putting together a variety of rides that would appeal to women of all skill levels.

In their first year, VeloFemmes has hosted everything from their regular weekly Monday morning rides at Point Defiance to an overnight bike camping trip, and everything in between. Because VeloFemmes tries to appeal to women of all cycling abilities, they work hard to provide cyclists with everything from beginner level rides to more advanced routes. Liljengren says VeloFemmes recently implemented a rating system to help cyclists assess which rides are right for them. The rating system is based on a one-to-three bike scale, with one bike being a cruiser level, conversational ride on a sidewalk or path, and a three being a faster-paced, endurance ride.

Liljengren encourages beginner cyclists and women who have never cycled before but who would like to, to join VeloFemmes for one of their beginner rides. She says beginner rides are a great way to gain confidence and become comfortable on a bike. “We always have at least five or six people on each ride, so you will be comfortable with someone who has experience. We have a no drop policy and never leave anyone behind. If you are nervous about it, it’s better than going out by yourself,” explains Liljengren.

Because VeloFemmes is a newer group that is completely free for its participants, riding with VeloFemmes is as simple as showing up for a ride and pedaling. It’s that easy. And that’s what Liljengren says makes VeloFemmes so special. “Our tagline is, ‘Tacoma women riding bikes, having fun.’ That’s the gist of it. It’s super simple. We’re not training for anything, we’re just out there to have fun and get more people out there on bikes. We can all ride in groups and that makes it that much more fun. Sometimes we even end up meeting for coffee or drinks. That’s always a nice bonus,” says Liljengren.

VeloFemmes is excited to have had such a successful first year and looks forward to what’s next. With more rides added to their calendar, including a weekly Wednesday night ride, and more women in attendance at each event, Liljengren says it’s exciting to see what 2014 has in store for Tacoma’s first women’s only cycling group.

“Everything is free, there are no dues, and we aren’t an ‘organization,’ we’re just a group. We want to keep it that way. Come and join,” she encourages. Liljengren also says that women interested in helping form the future of VeloFemmes are welcome and encouraged to assist with planning by reaching out directly to existing group members using the contact form on VeloFemmes website.

Women interested in learning more about this fun, community-based way of getting out and riding bikes with other females can find out more by visiting VeloFemmes website here. To stay up-to-day on the latest news and events from VeloFemmes, visit and like their Facebook page, here.