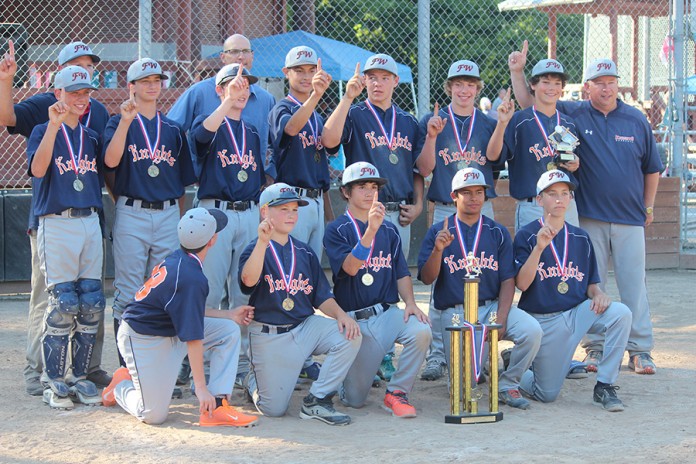 When local baseball coach and Federal Way resident John Sugg started the original Federal Way Knights baseball team in 2004, he had hopes of founding a local franchise that would carry on the sport’s great traditions of improving athleticism and bringing together the community.

A decade later, hosting seven baseball teams and two girls softball teams for players ranging in ages 8 to 18, that’s exactly what has happened.

“Our growth has come out of the fact that Federal Way Knights is not just baseball, but something to be invested in. It’s a way to give back to the community,” Sugg said. “Also, the teams are really good, but it’s always more about teaching kids how to play. The winning just comes as a byproduct.”

The draw for Puget Sound-area boys and girls to try out for the teams is that the Federal Way Knights organization’s focus is on teaching the sport’s fundamentals at a deeper level than the recreational leagues. Coaches — all of which are volunteers — come with high-level baseball coaching or player credentials, but they do it for the love of it, and for the love of working with kids who have a passion for it. They also get involved because they themselves have a passion for teaching the sport the right way.

“The coaches continue to always nurture [the players’] love of baseball, and inspire them to do their very best and always work hard,” said Christine Keene, whose son Connor was on the 14U team this year and has played with the Knights since he was 8. “C.J. has received unbelievable coaching and training, and has had such wonderful mentors in his coaches. He is well-prepared for high school ball.”

The majority of the nine teams’ expenses are made through donations and fundraising, such as the organization’s annual baseball/softball tournament each July. Hence the low cost for each player, which was $250 last year — compared to $2,000 or more for similar Puget Sound baseball tournament leagues. Sugg continually emphasizes the importance of both keeping player costs down and of depending on each boy or girl to do their part in that fundraising for both themselves and the team.

“There are not many baseball clubs that have solid foundations and last as long as the Knights have,” said Libby Ray, whose son is on the 13U team and has been with the Knights for five years. The family decided to join the Knights because it’s a well-established organization that’s at a higher level than recreation baseball but not focused on recruiting elite-level players from “Select” tournament teams. Plus, unlike many Select teams, it’s low-cost and local. “To provide competitive teams at the price the Knights do is kind of unheard of.”

Much of the individual Knights team fundraising helps defer costs for annual national tournament travel to locations throughout the U.S. “Some of the most fun things, and some of the most wonderful memories about being on the Knights have been at the national tournaments,” said Connor Keene, who – as a 14U player – has been to Cooperstown, Steamboat Springs, Colorado and Omaha this year for national play.

More and more Western Washington baseball and softball teams are looking at the Knights as fierce and fast-growing competition. Last year the 13U boys team alone swept everything from the Knights own annual regional tournament in Federal Way and the 13U Boys Washington State Sandy Koufax League tournament, to the national Triple Crown Tournament in Steamboat Springs. This year’s recent Knights tournament included more than 100 teams, making this the fourth year in a row the Knights have hit that benchmark.

All of the activity around the annual regional tournament, which is staged over two July weekends on fields throughout Federal Way and Des Moines, benefits more than the players who participate. There’s also the positive impact of the Knights on local and family-owned businesses throughout the tournament and baseball season in general when teams and families stream into local Federal Way restaurants, gas stations, hotels and movie theaters after the games. But it’s more than just the economic uptick that businesses there appreciate. It’s also what the Federal Way Knights provide in the way of benefiting youth and the city’s reputation.

“In many cases, as cities grow, the neighborhoods we used to play in and do everything together in have been replaced by your team,” said City of Federal Way spokesman Chris Carrel. “There’s the intangible value the Knights have here as an athletics program that provides a community within itself, where kids and families are doing a lot of things together and having a good time while the players are learning everything from getting through adversity to good sportsmanship to working together for the common good.”

For now, the Knights are rolling into the last weeks of tournament play, which includes the Cooperstown Dreams Park tournament for the 12U team at the end of August. The action there, which will be live-streamed through Cooperstown Dreams Park, will likely be followed this year by not just the team’s siblings and relatives at home, but by the growing numbers of Knights players and families who have already been through the experience and want to support the 12U team from back in the Pacific Northwest.

“They say, ‘Once a Knight, always a Knight,’ ” said Libby Ray. “I am proud to say my son is a Knight, and that we are part of the Knights’ family.”