Isaac and Isaiah Pierce are 11-year-old twins with a passion for baseball and other youth sports. They were selected for the Montesano Little League All Star Teams and, according to those who know them, display exemplary sportsmanship whether winning or losing.

The twins were selected by the Northwest Elite Baseball Organization as two of thirteen players chosen from Washington State to participate in their national program for elite players. The duo was chosen based on tryouts in Tacoma. Isaac and Isaiah were tremendously excited to represent their community through such a great honor.

Unfortunately, the program was to take place in Wisconsin and the boys worked to raise funding for their trip but came up short of the needed amount as the date approached. Seeing the potential for growth from this rare opportunity, the East Grays Harbor County Rotary Club stepped in to provide the remaining funds.

The boys lost some games and won some through this summer experience, but they learned increased levels of team building and confidence through the support.

For you sport-lovers out there especially, it’s a heart-warming story. Would you believe you could help contribute to more stories like these by drinking beer and having fun? That’s what Hoptoberfest is all about, which started about 7 years ago. The intent behind the event was to create a fundraiser people would enjoy and that would also benefit students in East Grays Harbor. This event now funds a scholarship.

To date, the event has helped to academically sponsor 20 kids – about three a year. These kids are not evaluated solely by their academic achievement, but rather on their willingness to give back to their community. Donna Rosi, Hoptoberfest’s event coordinator, explains, “We are willing to fund higher education, even if it’s only to a trade school. We want to fund kids interested in returning to the community and investing in it.”

Not only does the fundraiser promote education, the dollars earned also go toward community programs like Shop-With-A-Cop that help provide Christmas gifts for underprivileged kids in East County. The Children’s Advocacy Center, United Way, the Backpack Program, and kids like Isaac and Isaiah all benefit from this annual event.

This year, Hoptoberfest is boasting over 30 different microbrews from well-known breweries like Dick’s Brewing Co, Iron Horse Brewery, Astoria Brewing Co, Red Hook Brewing, and New Belgium Brewing, just to name a few. Upon arriving, every guest will receive a ballot. By doing various tastings, vote for your favorite beer. The People’s Choice last year was a stout brewed by Iron Horse. They will be defending that vote again this year, but with increased competition.

The guest host for the 2015 Hoptoberfest is pretty retro. His name is Erik Estrada, but you probably know him better by his role as Frank “Ponch” Poncharello on the popular 70s television show, Chips. Also on the stage will be local stars like Ericka Corban, Driftin’ Harbor Rats, Electric Eye with Phil Luce, and others! The silent auction will also have some great items to show off including sports equipment, beer paraphernalia, and Seahawks tickets.

It’s not often the desire to have a rip-roarin’ time and the desire to serve the community collide in a common event, but the Rotary Club has managed it. Grab a beer, take a selfie with Erik Estrada, and listen to some great local music from afternoon to evening! The venue for the Hoptoberfest event is the Quinault Beach Resort and Casino. So if you get bored (not likely), need a place to stay, or just a moment to escape the noise, you will have plenty of space to explore, relax, and have a great time.

Tickets may be purchased at the Quinault Beach Resort and Casino. Admission is $10 and includes a souvenir mug, and a starter drink scrip. 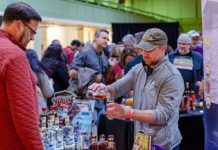 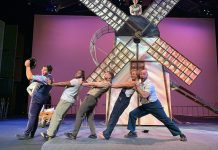