It’s not every day that I voluntarily hoist myself hundreds of feet in the air. Particularly when all I have is a few pieces of fabric and the breath of Mother Nature to keep me from falling into the abyss of Commencement Bay.

Then again, when your city is home to one of the only parasailing companies in the area, it’s hard to pass up the opportunity.

Driving down Ruston Way you’ve probably seen a few parasailers floating above the water, attached to bright-red parachutes. Some of them seem so high up in the air that I catch myself gasping. Each time I saw these flyers, I’d think to myself, maybe I’ll try it out.

Well, maybe finally happened, and I lived to tell the tale.

Pacific Parasail is a family-owned and operated business that launched in Tacoma in 2003. Since then they’ve flown more than 20,000 flights, from the pier at Ram Restaurant on Ruston Way, without ever having an accident (not even a stubbed toe).

But even that ridiculously clean record couldn’t shake me of my nerves as I strapped on my lifejacket and sat down into takeoff position.

But my fear isn’t unique. Captain Doug Luthi, the owner of Pacific Parasail, says most flyers are apprehensive. Even those who are accustomed to the skies.

“I had an airline stewardess come to us, and she was petrified of heights,” he said. “One of the things on her bucket list was to parasail, to get over that fear.”

Not only did she conquer her fear, but Luthi recalls how excited she was to actually get to look around while in the air, compared to the tunnel vision she experiences while at work inside a plane.

With so many places to look, where do you start?

No wonder the flight attendant was so excited to get to look out as she parasailed — the view is amazing. Take in Mount Rainier, the Olympic Mountains, Mount Baker, and downtown Tacoma from a perspective you might not have ever imagined.

Look below you (if you dare) to check out kayakers or, if you’re lucky, the occasional harbor seal or whale. (Want to increase your chances of seeing a whale? Book a flight in June or September).

Flyers have two height options when they go up in the air: either 600 feet of towline or 1,000 feet. Those who choose the 1,000 feet end up sailing at a height that surpasses the Space Needle. On clear days, these adventurous folks can even see as far as Seattle.

On my adventure, I chose 1,000 feet. While I couldn’t see Seattle, I will say that it really isn’t as scary as it seems. I didn’t even fully realize how high up I was until I looked at my pictures after the fact. In fact, the entire flight is quite peaceful.

That’s because the parachute above you acts as sort of a barrier or vacuum, reducing how much wind you feel. My parents, stationed on the boat below, endured far more turbulence and wind gusts than I did.

It’s not all smooth sailing, though. I’d hate to mislead you. The captain does well to warn you that as the towline extends out, you’ll likely hear some creaking and feel some jerking. But once you’re reached your maximum height, there’s nothing left to do but relax and take in the view for the 15 minutes or so you’re in the air.

Before taking flight, I had no idea just how special this experience would be. At times, Pacific Parasail has been the only company of its kind for hundreds of miles! More recently, other outfits have popped up in the Northwest, but Pacific Parasail offers an easy-to-get to location with ample parking and stellar views. Folks from up and down the West Coast come to the city’s waterfront for a chance to sail above the bay, yet here it is, in our very own backyard.

Luthi said this was an ideal spot to start his business because of the volume of people that visit the waterfront. As he sees it, there is no better advertising than when folks “see our parasails in the air.”

It’s true. That’s what led me to check it off from my bucket list.

Safety first – the masters of the parasail

Safety is, of course, a huge part of parasailing. Luthi and his team are all licensed through the United States Coast Guard with either a 50 ton or 100-ton Master License. The entire crew is trained in all aspects of parasailing, boat handling, and flight procedures.

They’re so good, in fact, that upon request they can give you a little toe-dip before reeling you back in.

I recommend the toe dip.

Ready to ride the winds of Commencement Bay?

Pacific Parasail’s season generally runs from May 1 to September 30, weather permitting. They’re located at the pier beside Ram Restaurant and Brewery, at 3001 Ruston Way.

Learn more by visiting Pacific Parasail online or by calling 253-272-3883 to make a reservation. 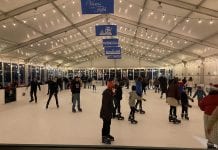 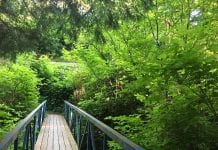