What started out as a family visit to veteran graves on Memorial Day turned into a mystery-solving adventure that not only involved a trail of sorrow and death, but a growing effort to restore long-neglected headstones around Pierce County.

The extended Colón family was strolling through the old section of Tacoma Cemetery. Cliff Colón’s mother, Terrie, spotted an overgrown and neglected headstone with a lamb ornamenting its top. The once bright stone was black and covered in moss. They investigated.

“You could not even hardly read the etching on it except for the name ‘Mamie’ and the year 1897,” said Sommer Stockinger. “My husband, Cliff, poured some water on it and did a light scrub with a few baby wipes to make out the wording. Just that made quite a difference! Her name was Mamie Aylwin. She died on October 21, 1897. It said she was ‘aged 26 years, 4 months, and 21 days.’”

Mary (McGraw) Aylwin had been born in Victoria, B.C. in 1871. Everyone called her Mamie. She never knew her biological father and was raised by her stepfather. She married Frank Aylwin. He was the owner of Tacoma’s famed Roxbury Saloon and nine years her senior. She was just 16. She gave birth to a daughter, Tracey, a year later.

Life was not easy. Her husband worked long hours at the saloon. Aylwin was known to frequent dance halls and social clubs as well. She was often in the company of streetcar conductor Peter Sweeney and his wife, Elizabeth. They would socialize while Aylwin’s husband worked. The women were often seen riding bicycles around town. Rumors started that something was amiss. Whispers about Aylwin and Sweeney having an affair behind the backs of their respective spouses grew into full-on street gossip. The social scorn of the rumors took its toll.

The pressure cooker boiled over the night of October 20, 1897, when Aylwin entered St. Joseph’s Hospital. She was excited and agitated. She sought morphine to calm her nerves. Once she calmed down, she was admitted into the hospital for observation. A nurse watched over her through the night. The nurse even gave her a rubber blanket that she had requested to keep warm. Hours passed as Aylwin apparently slept.

The nurse then discovered the room was burning when she returned during her medical rounds. The fire was quickly put out. Aylwin was already dead. She had apparently shot herself in the chest with her husband’s gun. She had either set her room on fire or embers from the muzzle sparked the blaze. She had apparently used the heavy rubber blanket to muffle the boom caused by the 38-caliber revolver firing. The tragedy didn’t end there, however.

“Hours later, the bloody body of Peter Sweeney was found clinging to life, shot in the head, lying in a vacant second story of a local store on 10th and S. J. Street, around the corner from his home,” Stockinger said, noting that the saga played out on the front pages of the Tacoma Daily Ledger for days

Sweeney died days later and was buried in Federal Way’s Gethsemane Cemetery. Aylwin had left a note that detailed her burial wishes and for the care of her daughter, who was raised by her surviving husband. Frank Aylwin died in 1945 after returning to Canada. Tracey went on to marry a doctor in Seattle before moving to New York City and living a full life. She was quite the jet setter, vacationing around the world before settling in California to live out the rest of her days. She died in 1963 and she never had children. There were no heirs to visit or care for her mother’s gravestone way up in Tacoma. A century passed before Aylwin’s life was rediscovered.

Sweeney’s widow, Elizabeth continued to live in Tacoma until she moved to California to live with her sister in law in 1940. But a bit of mystery remains since several records searches could not find any information about her death.

In a few twists of fate, the Main Branch of the Tacoma Public Library is the site of Aylwin’s old apartment building, and the former Sweeney house, at 818 S. J Street, was a residence that Stockinger and Colón had once considered renting when they first married.

Armed with the tragic story of Aylwin’s life and suicide, the family returned to her overgrown headstone and started scrubbing and cleaning.

“With time and a lot of elbow grease, it was restored to its former alabaster beauty,” Stockinger said. “It was such a powerful experience that my husband has cleaned and restored nearly all of the lambs and fallen doves and other headstones typically used for children and sometimes young adults at the Old Tacoma Cemetery.”

They have cleaned more than 130 gravestones so far, always getting permission from the cemetery operators and using the same cleaning solution used at Arlington National Cemetery so nothing is damaged in the process. They posted a video on YouTube about the work and the process for others interested in getting involved.

“They all have their own little stories,” Colón said. “They have all been forgotten. Well, now they are no longer forgotten. For me, it is also very relaxing. It’s like yoga.”

But what started out as family time during the summer months is changing into a group activity, since there are thousands of more long-neglected gravestones around Pierce County.

“I would love re-enforcements,” Colón said.

Anyone interested in learning more about cleaning headstones can email Colón at CliffColon+gravestones@gmail.com. A meetup is in the works for 9:00 a.m. September 28 at Old Tacoma Cemetery. People should bring their own plastic-bristle brushes, plastic scrappers, old toothbrushes, spray bottles and gloves. Donations to cover the cost of the D/2 Biological Cleaner would be appreciated. People who are interested in helping the effort, but don’t want to clean can still watch and learn or photograph headstones for FindaGrave.com, which is also hosting community events around the nation October 4-6. 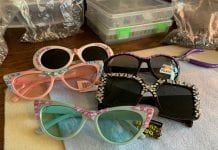 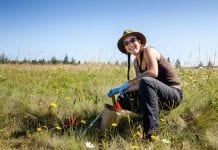