The Evergreen State College’s, 2021 “Art of Giving,” provided a lot of firsts when it, for the first time since its inception in 2009, was delivered as a virtual scholarship drive, exceeding its goal of $200,000 for scholarship dollars and raising more than $250,000 for the Evergreen Scholarship Fund.

This year’s scholarship drive theme was “A Time for Tenacity,” which has been the theme for many as we emerge from a global pandemic, social unrest and economic uncertainty. More than ever before, the world needs Greeners whose passions, ingenuity, and tenacity coupled with the power of their Evergreen education will position them to be leaders with the capacity to address the challenges facing our world.

During a typical year, a gala is held where friends of the college, alumni, faculty and community members can gather in person to raise scholarship dollars for Evergreen students, but due to COVID-19, a six-week campaign where people were able to donate via the college’s website was held and ended with an hour-long virtual program held on April 24. Attendees were given insight into just how meaningful scholarship dollars are from a wonderful keynote speech by Parris Miller – class of ’22.

For Miller, giving back to the community runs in the family. He is a proud descendent of Elizabeth Wesley, a founding member of the Tacoma Hilltop’s Shiloh Baptist Church, and the inspiration for the Elizabeth Wesley Youth Merit Incentive award recognizing local Black high school students for their academic and civic achievements.

The Hilltop has always been home for Parris. It’s where he grew up. It’s where he hopes to mentor at-risk youth. It’s also where, at the age of nine, he joined a gang. “I grew up believing that, statistically, I wouldn’t live past 18,” says Parris. “My education was limited. In my peer group, school, or anything related to it, was weird. Now, I have been incarcerated for 30 of my 40 years.”

Today, Parris aspires to work directly with youth in juvenile detention centers to bring his perspective to those who need it most. Now in his junior year at Evergreen-Tacoma, Parris is pursuing a bachelor’s degree with an emphasis in Public Administration. His personal mission is to lift up others – to be the difference that prevents them from experiencing some of the challenges he has faced.

With resilience, perspective, and the support of scholarships, Parris is prepared to honor Elizabeth’s legacy in the community he calls home.

The impact Evergreen and the scholarship dollars that helped make Miller’s education possible are invaluable and he says, “Everything I have learned at Evergreen will allow me to help younger generations unlock potential they might not have seen in themselves yet. The investments others have made in me are investments in all the kids I want to help, and that is the most fulfilling thing I can imagine.”

Money is often a barrier to students obtaining an education. At Evergreen, 40% of students are low-income. Scholarships allow students to focus on their studies instead of worrying about how they will pay for college.

Thanks to the generosity of those who donated to the 2021 Art of Giving Scholarship Drive, 100 students can receive scholarships ensuring they can continue forward to with confidence on their journey of learning.

As part of a video shown during the event, Evergreen graduate, Edward Parnel ’16, shared how the scholarship dollars he was awarded helped him reset and build a life that he is proud of. Parnell was the keynote speaker for the 2016 Art of Giving Gala & Auction. The investments made by others in him helped Parnell obtain his graduate degree and led him on a path where he is able to mentor people and give something back, which he says is his greatest thrill. In the true act of giving, Parnel was also able to literally pay it forward to Greeners now and in the future by providing a monetary gift to this year’s drive.

Learn more by visiting The Evergreen State College website. Learn how you can invest in the future for an Evergreen student at the Art of Giving website. 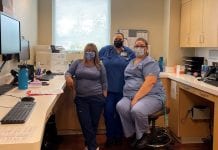