Home Events Do the Puyallup! A History of the Washington State Fair
Facebook39Tweet

A singer wrote in 1975, “Oh, you can do it at a trot. You can do it at a gallop. You can do it real slow so your heart won’t palpitate. Just don’t be late. Do the Puyallup.” And who wants to be late? The Puyallup Fair (officially the Washington State Fair) offers carnival rides, agricultural and livestock displays/competitions, food, rodeo shows, and musical performances, among other attractions.

The fair has a long history. It traces its origins to 1900 when a group of local farmers decided to hold an agricultural and livestock fair in Puyallup. They convinced the city’s Board of Trade to help organize the event and raised money by popular subscription. A vacant lot west of Pioneer Park was selected, a fence and a few tents and sheds were built, and the Valley Fair was born.

Held October 4 through 6, 1900, attendance was small the first day but kicked off the next. A family could pay a dollar for admission for all three days of the fair. There were no concessions, and people brought their own picnic lunches. There were a number of contests and competitions. A farmer won an $8 plow for the best sample of Hubbard squash, and a woman won $2.50 for the best quart of raspberry jam. However, a couple that agreed to a public wedding at the fair for a free rocking chair and $10 worth of groceries backed out at the last minute.

Organizers counted the fair as a success and made it an annual event. The following year it was moved to a ten-acre site at the southwest corner of Ninth Avenue Southwest and Meridian South. This area forms the heart of today’s fairgrounds. The event was renamed the Western Washington Fair in 1913.

The fair proved increasingly popular. It expanded to four days (Thursday through Sunday) in 1903 and has since expanded to 20 days. Before cars became popular, many people took the train to the event from nearby cities. Organizers even turned attendance into a competition, holding Seattle and Tacoma Days, with each city rivaling to bring more people to the fair on their day.

The 1910s also saw the debut of Fisher Fair Scones. First appearing at the 1915 Panama-Pacific Exposition in San Francisco, they were an instant hit in Puyallup. These iconic scones, served with raspberry jam, promoted Fisher Flouring Mills, a Seattle-based company. The recipe remains the same today, although raisins were dropped in 1974. In the late 1980s, Fisher was bought by Continental Mills and the scones were briefly marketed under the brand name Krusteaz until popular demand convinced executives to restore the name. Over the last century, over a hundred million scones have been sold at the state fair.

The 1920s brought more changes to the fair as increasing numbers of people traveling by automobile to the event. Motorcycle races were added alongside more traditional horseraces, and “Autopolo” was added as a sport. In the game, drivers used their Model T Fords to push a giant rubber ball towards a goal. Indeed, the fair increasingly used spectacle to entertain visitors —chariot racing, daredevil motorcycle stunts, “better baby” contests, cow-milking contests with celebrities, anything to draw a crowd.

Attendance took a slight dip during the early part of the Great Depression but soon began to climb again. Despite the difficult economic situation, a fairway for carnival rides was created in 1932, the same year presidential hopeful Franklin D. Roosevelt visited the fair on the campaign trail. These rides included wooden roller coasters and other attractions. One attraction was a water ride called “The Old Mill,” which children liked to prank by pouring soup into the water. Children also enjoyed the “Mickey Mouse Circus,” where live mice turned apparatuses to make the show move.

Three hundred thousand people attended the fair in 1941, the last one held until after World War II. The 943rd Signal Service Battalion briefly occupied the fairgrounds after Pearl Harbor. Eight thousand Japanese Americans were held at the fairgrounds under Executive Order 9066. The Puyallup Assembly Center, nicknamed “Camp Harmony,” was a temporary location before people were sent to internment camps, mostly in Idaho.

A memorial statue to this dark chapter of history, created by artist George Tsutakawa, is located just inside the main entrance gate of the fairgrounds. It depicts people of all races and ages living together in peace and harmony.

Despite efforts to start the fair again, the government continued to rent the property for the rest of the war for a symbolic dollar a year. The fair reopened in 1946 with record attendance. In 1951 footage of Brahma bull-riding at the Puyallup event was used for the film “Cowpoke.”

In June 1970, a fire destroyed the grandstand and many buildings, including the Old Mill water ride. Determined to continue, much of the year’s fair was held in tents before the damaged areas could be rebuilt. In 1993 a thirteen-million-dollar renovation project revamped the fairgrounds. 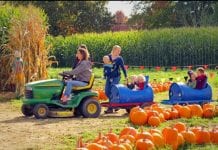 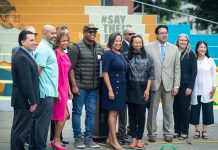 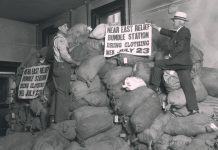