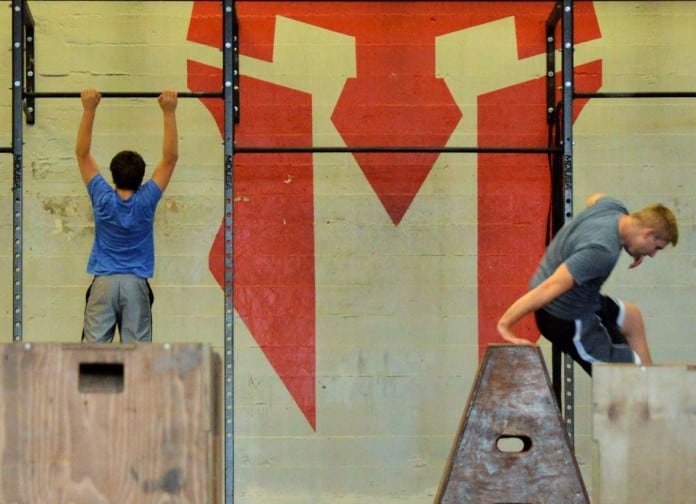 “What we’re going to be working on next is traveling,” Chris Pascual says. Clad in black and with his hair tied back, he glances at Brandon Grant and Alex Guthrie to ensure that they are watching. Then, with what seems like no momentum, he springs up on his feet and aligns himself effortlessly on a suspended bar above him. He rocks forward and then back, again with what seems like no exertion and lands squarely on the narrow top of a ramp. “Ready?” he asks as he makes his descent as graceful as his ascension.

One after another, parkour students Brandon and Alex mimic his movements. Their motions are less fluid and seem to require a little more concentration than their instructor’s, but their limbs have been warmed up from a series of rolling and balancing exercises.

In this intimate session and in ones like it every Saturday, these young athletes are learning the finer points of free-running. By building on the exercises that they practice both on the mats and in their own surroundings, these two will one day be able to move freely from obstacle to obstacle as easily as if they were monkeying around on the playground. That’s what parkour is all about: freedom of movement.

Whether you call it parkour or free-running, this energetic sport was developed in France by a 15-year-old David Belle around 1988. The sport is described by local traceur (or parkour practitioner) and Morgan Family YMCA parkour instructor Alex Sanchez as “a non-combat form of martial arts as a discipline and not a sport.”

Adapted from the French word “parcours,” which means “the way through,” the sport consists of running blended with a fluid interaction with the elements. This art form cultivates skills that were originally taught as part of an elite training program for the French Special Forces known as “Parcours du Combattant” or “The Path of the Warrior.” It was Belle, son of a Parcours Warrior phenom, who changed the spelling to include a “k” and is often credited for popularizing the sport.

Belle and his band of limber, agile friends — who dubbed themselves the Yamakazi — instigated the now-worldwide movement that is known today as parkour.

On the cool, smooth floor of Tacoma Strength’s studio, in between drills Alex Guthrie explains what drew him to parkour: it looked cool. Guthrie’s partner for this session, Brandon Grant, had similar reasons for trying his hand at this fluid form of transportation. “I heard about Tacoma Strengths’ parkour class and I had seen free-running on the internet, YouTube and stuff. I saw that they offered a first class for free and thought it sounded really interesting. And here I am, almost a year later. I love it,” Grant adds before jogging back to the pull-up bars to try his hand again at a wall tack.

I could never do that.

To watch these lean young men and their instructor use the gym’s Crossfit equipment as a literal jungle gym, it’s easy to imagine that this is not a sport for just anyone. Alex Sanchez disagrees, however. “Parkour attracts people of all ages and all body types. Anyone can practice parkour at their own skill level with adequate training and progression,” says Sanchez. Parkour Vision instructor Chris Pascual agrees, adding that the sort of people he sees most often attracted to the sport are independent types who are interested in exploring creative athleticism and utilitarian skills.

What’s in it for me?

For some, the appeal of parkour is not immediately apparent. Just as skateboarders grind on rails and use curved surfaces as halfpipes, traceurs love to use their environment like a veritable obstacle course. For the less mobile among us, all this running and jumping and tucking and rolling can look a lot like a mess of shenanigans. For others, there is a certain amount of intrigue, but also a certain amount of trepidation. After all, where on earth can a person really use any of this?

Martial arts and parkour instructor Chris Pascual explains that it’s not just the physical benefits of parkour that keep him footloose and fancy free. “There’s definitely a benefit with parkour of building confidence and getting over fears,” he says. “But there’s also learning to understand your limits at the same time as you push them. My favorite benefit of doing parkour is just becoming more aware of the world around you as a place that can be moved through in a variety of ways, not just constructed paths laid out by architecture or common ways of thinking. That’s part of why Parkour Visions chose the name it has. A common skill mentioned is “parkour vision,” where you can see possible lines of movement where other people might just see a barrier.”

Sanchez says that many people are attracted to the sense of accomplishment they gain after conquering a new challenge in their gradual, progressive training. As a parkour coordinator at the Morgan Family YMCA, Sanchez loves to help students set goals of all sizes, and then work alongside his traceurs to realize those ambitions. “I love watching students gain confidence through the skills that are being taught through our experience. Because of the new challenges that I take on through this discipline, I have gained a vast amount of confidence to take on many obstacles, whether they be mental, physical or spiritual.”

Try it for yourself.

To get started in this wild and crazy world of uninhibited self-expression, instructor Alex Sanchez says that all you really need are items that you already own. No classroom is necessarily required to take up parkour training.

For starters, he says, find a comfortable pair of running shoes and workout attire that will not restrict your movement; that will be enough to initiate your training. “Just as important as your gear is knowing your physical limitations to prevent serious injury. The greatest tip I can give to a new practitioner in parkour is to take small steps and progressions to build confidence, and not to forget: lots of repetition! Seek sources that will teach you correct technique and solid foundation, such as parkour/free-running gyms, video tutorials from pros or credible sources and trustworthy coaches.”

Both instructors say that Seattle offers a diverse and active parkour community, and that Parkour Visions is at the heart of this thriving collective. For those who are looking or something a little closer to the South Sound area, Parkour Visions offers a first class free at the Tacoma Strength studio (2354 Jefferson Ave., Tacoma; 206-923-8864). The Morgan Family YMCA (1002 S. Pearl St., Tacoma; 254-564-9622) also teaches classes for students of all ages and ability levels.

To explore parkour from the comfort of your own home, visit the links above as well as those that follow for a little more info on how you can become involved in the exciting world of free-running and parkour in the South Sound.