Neena Jones was only looking for something to do at the end of her work week. She never thought it would become an obsession.

“My old roommate from college invited me join her bowling team,” she says. The team was part of a league operated by Comeback Sports. “At the time, I was looking for something to do because all I was doing was going to work and going home.”

Jones works as a pharmacy assistant and wasn’t interested in the bar scene. She says she was taken aback by the invitation, but decided to give it a try anyway.

“I was not any good when I started. But joining the team got me out of my comfort zone and I met new people and I made a lot of friends.”

The invitation came five years ago. She’s still playing for that bowling team and is also playing several other sports Comeback Sports organizes too.

“I signed up for softball and I just decided to join a kickball team too.”

Comeback Sports was founded in 2009 by three college friends, David Mensonides, Eddie Barranger and Stephan Bergland. They all studied business at the University of Puget Sound. After graduating, they saw a need for amateur sports in the South Sound. They saw people driving from Tacoma to Seattle to play softball and soccer for fun.

“We offered kickball our first year,” Mensonides says. “We didn’t think we’d have as much interest as we actually got! We were hoping to have enough people sign up so we’d have at least two teams. But we ended up with four teams that first year!”

Mensonides says the athletes Comeback attracts aren’t those with dreams of being spotted by a scout for the Mariners or the Seahawks.

“We’re a rec league. We cater to the person who works nine to five and they want to have some fun. We want to be the light at the end of the tunnel that is their work week. No matter what kind of shape you’re in or how unathletic you are, you are welcome!”

While Comeback Sports began with kickball, it quickly expanded to include soccer. It now hosts leagues for 11 different sports including bowling, volleyball, golf and others.

“We get people signing up for leagues the minute we open them up for enrollment,” says Vanessa Eskelin, the league manager for Comeback Sports. She estimates nearly 90 percent of the athletes also participate in at least one other sport. Many participants, she says, are people like Neena Jones—someone who was just looking for something to do other than go to bars.

“We get calls all the time from people who just moved here and they don’t know anyone. They want to meet new people and exercise at the same time.”

Through the league, Jones not only made what she describes as new lifelong friends, she also met her boyfriend.

“Well, we were dating for a while, but now we’re just talking and hanging out,” she explained. “I haven’t changed my Facebook status or anything.”

“I wish I could track all the people in Comeback who’ve met, gotten married and had kids,” Eskelin says. “It’s like we’re all one big family! I met my husband playing in Comeback!”

Many players sign up to play with Comeback Sports as preformed teams. Others though hope to join teams. To help make it easier for new athletes to get acclimated to their new team, Mensonides created something called Free Agent teams. These teams consist entirely of new players who start the season not knowing any other people.

“By the time a new season starts, these Free Agents want to create teams of their own. Whenever that happens, it reminds me why I love my job.”

Registration fees cost about $10 a game, Mensonides says. Each spring, an all-star softball game is held at Cheney Stadium. Each team nominates its two best players to represent them at the game.

“It’s our way of saying thanks to our players.”

“We’re thinking about adding ultimate Frisbee. I think there might be some interest there. We want as many players as possible in as many sports as possible.”

Applications to sign up for a team with Comeback Sports is available on their website, emailing or by calling 253-326-5168. 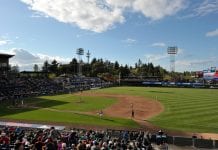