Over the past couple of years, the Tacoma restaurant scene has grown to be quite a contender. No longer do T-Towners have to brave I-5 North to sample high-quality eats, nor do we have to hit I-5 South to get a taste of innovative cuisine down in Portland.

Several local restaurants have been serving up delectable dishes that quickly become faves of area residents—all this is due to the talented chefs who embody the intense passion of great chefs before them.

Grissom earned his chops in a variety of locales. “I was born in Tacoma and lived here until about 16, then moved to Ensenada, Baja California, Mexico,” says Grissom. “Then lived in St. Elizabeth, Jamaica, until I was 18. I then moved back home for a short while; then to Phoenix, Arizona; then back home, then to Los Angeles; then to Montana, and now back.”

“Going for it” was the most challenging part of following his dream. Grissom says that being away from his hometown, being isolated of sorts, completely on his own, was the hardest thing he had to face.

“No support, No safety nets. Just going all in at all times. Getting past the anxiety and nervousness you place on yourself when making those leaps. I would tell myself each day to just keep going. Never step over an opportunity. Never say no. See where saying yes leads you.”

Not only did he learn his way around a kitchen during his travels, he learned valuable life lessons as well. “Perspective within kitchens, perspective towards ingredients, perspective as humans. If we stay in the same place for too long, we become stagnant. I’ve done my best to continue to stay uncomfortable, to not become complacent. It’s always a challenge, but I believe it is where we learn the most.”

While working on a different project out of state, Grissom would come home to Tacoma to visit friends and relatives. “And always, without fail, would go to Indo and sit at the kitchen bar.”

Although he and Nanakornphanom knew of each other, they had not met before one of Grissom’s frequent forays into Indo. “Once we did meet, we built a friendship through food and similar ideals when it came to the restaurant industry. He was bouncing the idea around about, wanting to open a ramen restaurant next door and I’ve loved Japan and ramen for a long while. Knowing there was no decent ramen here, I asked if he wanted to partner on the project. Fourteen months later, Moshi opened.”

Grissom developed his love of ramen during a visit to Japan in 2017. When speaking of Moshi Moshi’s menu, he says, “I was inspired by Japan. The country and its culture is breathtaking. I spent July between Tokyo and Osaka and was just captivated by the culture. The honor, the respect to ingredients, the idea of hiding such complicated technique under a veil of simplicity.”

He adds, “We do our best to pay homage and respect to the culture of Japan and use as local and as high of quality ingredients as possible. We knew that we wanted to do more than just ramen, which is why we offer small plates and skewers. We rotate them every month or so to keep them current and seasonal.”

What is most impressive of the ingredients used at Moshi Moshi is that many of them are made in house. “From the noodles, to the miso, the shoyu koji (soy sauce and rice spores) ferments, the shio koji (Japanese seasoning) ferments, the vinegar, bacon, everything. I think it’s time that we as cooks get rid of words and verbiage like “house made” or “made in house.” These things should be already expected of us and the quality we provide to our guests.”

Grissom and Nanakornphanom designed Moshi Moshi’s menu together. “We make a good team, where I would hit a wall in testing, he would offer a different perspective to bridge that gap,” says Grissom.

“We quickly struck up a rapport talking about our shared passion for food. I was already planning on starting a second restaurant at this time. Aaron showed interest and I realized he would be a valuable addition to our team,” says Nanakornphanom. “I believe Aaron is a very talented chef, he is an innovative and creative person. I appreciate his organized and meticulous approach to cooking. We quickly began to learn from one another and I find our cooking styles to be complimentary.”

So why after all this time come back home to Tacoma? “I came back to Tacoma because I saw its growth and wanted to be a part of it. When I left to move to Los Angeles in 2012, I wasn’t sure I would ever come back,” says Grissom. “I love the people of Tacoma, just really felt like we lacked an identity as far as food, and Tacoma had a long way to go in the food scene. I am driven by good food—driven by passionate chefs—driven by the unknown. Tacoma didn’t seem to fill that void for me at the time.”

Grissom says guests at Moshi Moshi can expect stylish aesthetics with an approachable feel, and he sources all pork, beef and chicken locally. “Nothing beyond Idaho, Oregon or Washington,” he explains.

“Tacoma is growing by leaps and bounds, seemingly every month. I am proud to stand as a part of the food scene here and am even more excited to see it in five years,” says Grissom.

“Outside of our ramen, I really like the crispy beef tartare, where we serve beef on beef so to speak. We puff beef tendons and season them with sansho peppercorn, a mouth numbing citrus berry similar to Sichuan peppercorn. Served with preserved green avocado, minced wagyu flank steak, kumquats and mizuna.”

“Tacoma is moving rapidly in the right direction. We have a long way to go, but passion breads creativity, and creativity evolves into progression,” shares Grissom. “As we continue to push the boundaries, and our guests support the unique, different and unfamiliar, I believe we can find an identity other than just a city south of Seattle.” 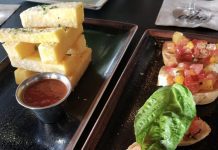 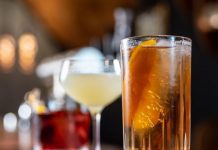