Animals, whether beasts of burden or mascots have played interesting roles in businesses around Puget Sound for generations.

Most folks around these parts naturally think about either the legendary monkeys at Bob’s Java Jive or the area’s most famous animal, Ivan, the western lowland gorilla. He once graced the World-Famous B&I before moving on to Zoo Atlanta for his sunset years of life. Everyone who visited the department store turned variety shop has “an Ivan story.” Of course, he had neighbors during the early years. But he was undoubtedly the most famous. And he was certainly not the first animal to be used locally as a promotional gimmick to bring customers through a business.

That “honor” might go to Jack the Bear, who had a pen in what was the Tacoma Hotel in the years before the turn of the last century. He was known for sampling food from plates left unattended by diners in the hotel’s posh restaurant. It was noted at the time that he could apparently grip mugs of beer with his massive paws and chug down a cold one without spilling anything on his fur. He would, however, be accidentally shot by a police officer in 1892 after he slipped out of his enclosure and wandered around downtown Tacoma. He was later stuffed and displayed in the hotel’s lobby until a fire gutted the landmark in 1935. The stuffed Jack survived the blaze only to then be archived by the Washington State Historical Society into the 1950s, when it was deemed too moth damaged to save.

The legacy of businesses hosting exotic animals didn’t end there, however.

A smaller feline could be found just down the street at Binyon Optical Co., where Dr. Harold Nickelsen displayed a live lynx in a cage. He had captured it in the 1930s as part of his big game trophy collection. And George Westbeau let a 260-pound lioness named “Little Tyke” roam around his Packard dealership until law enforcement officials told him in 1949 to hire an attendant to only allow her to walk around on a leash. Little Tyke was even the official mascot for the Lions Club float in the Daffodil Parade that year, which likely helped the club win first place in the service clubs category.

Little Tyke died of pneumonia in 1955 while traveling California at the age of nine. She was buried in the central plot of the Seattle-Tacoma Pet Cemetery near Des Moines after one last car ride in a black hearse. Westbeau went on to write a book, “Little Tyke,” about the lioness, stating that she never tried to attack anyone because she was a vegetarian, disliking even the smell of meat.

Get Rich With Chinchillas

There were also times when exotic animals weren’t promotional gimmicks but the products themselves. These weren’t pet shops but commodities and investments. A little-known history of the get-rich-quick schemes of Tacoma is the story of when it was a regional headquarters for chinchilla investors.

Flashback to the late 1940s and 1950s for a minute — a furry fad hit the country back then, and Tacoma had the Gold Seal Chinchilla Association to feed that fad.

The association boasted 300 members from around the Pacific Northwest and focused on the investment opportunities of raising chinchillas for the fur trade and food industry. Gold Seal sold breeding stock for the chinchilla trade under the banner of “You too can make big money in the fastest growing business in America.” It was a national investment fad, not unlike the more recent booms and busts associated with comic books, emu breeding and Beanie Babies. People invested in chinchillas in droves, not for the rodent’s dense, luxurious fur, but in the hope that they could profit by selling the animals to others. In truth, chinchilla farming was a type of pyramid scheme since they had no real value for use in fur coats or any other commercial use.

Everything started falling apart in the summer of 1954 when Farmers Chinchilla Cooperative of America held the first organized, collective sale of chinchilla pelts. Conducted by the New York Auction Company, the auction marked the formal emergence of a professional industry and the death knell for casual investors since sales were well below expectations. The National Better Business Bureau would later blast the investment scheme by advertising that the “weekly flow of cash from honest people to chinchilla crooks is averaging at least $500,000,” about $4.8 million in today’s dollars. Tacoma’s Gold Seal members weren’t spared. Pretty much every chinchilla investor lost money except the founder and president of the association. He made his money not from investing but in commissions off every new member he signed up for the scheme. Lawsuits and counterclaims dragged out for another decade.

Odder points in Puget Sound animal stories also include when Tacoma was center stage for the quirky sport of octopus wrestling.

Tacoma’s Craftopia Offers a Space to Laugh and Learn: Arts and Crafts Classes Without Breaking the Bank 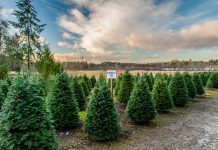 2022 Christmas Tree Farms in Tacoma and Throughout Pierce County