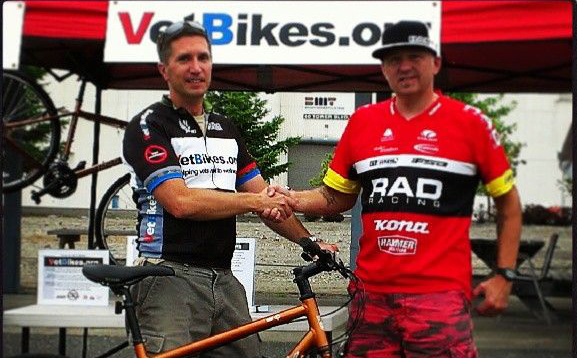 Andy Newman knows that inside almost every garage in Washington there is a decent bike gathering dust. His goal is to give those bikes a new life with a veteran. Newman, a retired Air Force pilot who was stationed at Fort Lewis, understands that many combat veterans suffer in ways that are invisible to most people, and he wants to do his part to help them recover from both the physical and emotional wounds incurred during service to our country.

“It started with my assignment as an Air Force guy embedded with the Army in Iraq and Afghanistan. The load of bricks the Army and Marines carried in these wars was awe inspiring. Ground duty in a war zone is something that most Americans will never fully understand,” explains Newman. “The Army and Marine troops I saw in combat zones endured a lot for us.” He knew then that he wanted to do something to give back to our troops, but the question was how?

Newman stumbled upon his idea by chance. “In 2011, while back in my office at Fort Lewis, I saw a group of cyclists getting ready to head out for a ride one morning. I went out and asked if I could join them sometime and found out they were a group of wounded and recovering soldiers using cycling as therapy and recovery while getting well at the Warrior Transition Battalion, a unit of Madigan Army Medical Center. They were riding nice road bikes that the Army provided on a lender basis. I asked what they were going to ride when they were medically retired or separated for medical reasons, and they said they had to turn the bikes in, and then they would be on their own.”

And the inspiration for VetBikes was born.

The thought of veterans not being able to continue their therapy concerned Newman. An avid cyclist for most of his life, he knows that purchasing a decent bike –one fit for racing, off road riding, or even just a reliable commuter bike – can be a financial hardship for a lot of people. He also knows the benefits, both physical and mental, that exercise can bring. “All cyclists know the feeling of freedom and healing from whatever is bothering them that cycling provides. This is especially true for recovering soldiers, more so for the PTSD [Post Traumatic Stress Disorder] that almost all of these wounded and injured soldiers have.”

Most people understand that because of the dopamine released into the system, exercise can help with all levels of stress, including PTSD. But a sport like cycling is different. “When the brain also has to manage a machine and process the world speeding by like it does on a bike, this [dopamine] effect is greatly enhanced,” says Newman. “One of the soldiers summed it up this way: The demons that follow us are a few steps behind us when running, but miles behind us when riding a bike.”

In 2012, fully retired from the Air Force and working as a pilot for United Airlines, Newman, his brother-in-law Alex Young, and their friend Jeff Aregger landed on the concept for VetBikes. The idea? To collect high quality used parts and build bikes for vets to keep.

With Young’s expertise in non-profit administration and Newman’s military background they were able to form a 501c3 and develop relationships with both the Warrior Transition Battalion at Madigan and the Washington State V.A. to identify veterans who need bikes. “When those individuals separate they have a custom fitted bicycle waiting for them to continue their recovery.”

The partnership with the V.A. is a little different than that with the Warrior Transition Battalion. “Their intent is to have no veteran on the street without being offered a way out, to link them with their GI Bill benefits, get them into a residence and back in school and onto a job and back into our community,” says Newman. “There is an amazing program called Building 9  for veterans in Retsil, Wash. The former homeless veterans there are the true comeback kids, working hard to get back into the community like the rest of us, getting a skill, and then a job. Most of these vets can’t drive, but they can ride a bike.”

The V.A. relationship also brought VetBikes their chief mechanic. Last year, a homeless vet entered the Building 9 program. A trained bicycle mechanic, he wanted to work on the bikes. Park Tool donated tools and VetBikes and the V.A. helped build a bike shop in the Building 9 residence.  Now “Mike the Mechanic” is employed, building and repairing bikes for his fellow vets. “We keep him supplied with bikes to restore and covert into commuters,” says Newman. “The production has reached a level where Building 9 is able to build bikes for other V.A. residences across the state. This is a huge point of pride for us.”

Of course, there is the ongoing need for quality bikes and components. Newman emphasizes that they are interested in older, adult-sized, name-brand bikes that were purchased through bike shops rather than cheap department store bikes. They especially need bikes that can be converted into reliable commuters: Old steel mountain bikes, road, cyclocross and hybrid bikes.

Newman, Young, and Areggar are all cyclists. Their kids are cyclists, and they know lots of other cyclists. The three men alone had enough spare parts in their garages to build three complete bikes. Newman compares cyclists to golfers and fishermen: “They want the latest gear, the newest and fastest innovation.  Therefore, they buy new stuff all the time.” Those leftover parts are how VetBikes works, he says. Instead of selling bikes or parts on Ebay or Craigslist and meeting someone in a parking lot to make a transaction, VetBikes offers cyclists a way to donate their unused bikes, components, and gear to a worthy cause.

Due to the generosity of many cyclists, as of last month VetBikes had delivered more than 125 bikes to vets living throughout Washington state, including many here in Pierce County. Each took an average of six hours to tear down, rehab, polish, and rebuild. Newman wants everyone to know that there are still countless veterans who can benefit from your donations though.

“Almost every garage in the community has a decent not-so-new bike that is gathering dust. We can give it a new life, an honorable life, and you get a tax benefit to boot! But the result for these vets is a new level of freedom and independence, fitness, and recovery.”

If you have unused bikes or components gathering dust in your garage, please consider making a donation to VetBikes. You can learn more about the program by visiting their website at VetBikes.org.

To learn more about the Building 9 program, and to see a King 5 feature about VetBikes, click here. 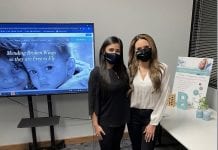 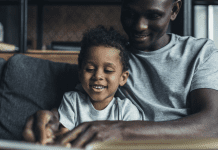 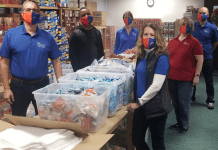