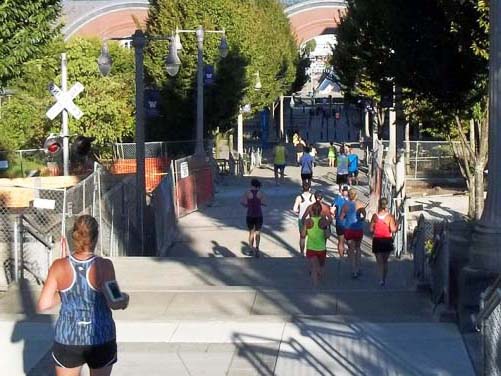 The pure exhilaration of a challenging workout is what keeps truly dedicated runners running through rain, shine, injury or fatigue. I certainly aspire to such unwavering running dedication, but I am still inclined to make excuses for skipping one workout here, or another one there. The Tacoma Runners, however, have come up with a powerful incentive that I could not resist: a weekly Thursday Night Beer Run. The Tacoma Runners website makes clear that they welcome all skill levels. Just show up to the posted start point for that week and join in the run. I am very glad that I did. Far more than a good workout, I found good people, terrific enthusiasm, and a great time out.

I found Tacoma Runners almost by accident. I was searching online for new running routes and I came across their webpage. I was immediately intrigued. It wasn’t so much the promise of the beer during the Beer Run that I found appealing, so much as the idea of a group of people coming together simply to hang out and run. I took a chance and decided to give it a try.

After parking near the bar where the run would begin, I meander over to the group already forming. Scheduled to begin at 6:30 p.m., I show up about fifteen minutes early. There is already a sizable crowd. Most people are chatting, some are stretching and some are doing both. Several have brought their dogs along for the run and one woman will be pushing a jogging stroller with a little girl. I overheard her remark to her daughter, “See, I told you it was a running party!”

Soon, Rob McNair-Huff is calling for the attention of the group that numbers well over 100 at this point. McNair-Huff is one of the founding members of the group, along with Sarah Cutting and Derek Young. These three have been running with Tacoma Runners since that first year, when the Runners numbered less than 10, and all three original members now stand at the front of the crowd waiting to get moving. McNair-Huff takes the time to explain the route for the evening, as well as to remind us all to be cautious of traffic and to be courteous of motorists. With that, he starts the run.

There is no jostling or pushing, just laughing, conversation, and shouts of encouragement. Everyone makes room along the sidewalk as we get underway. The first hill is steep by my novice standards, and then there are stairs to climb, but the mood stays electric and fun. After the initial ascent, the route evens out.

The views are spectacular. Between the buildings and city blocks, the water is visible down the hills. I feel so fortunate to see Tacoma in this fresh form, rather than my typical style such as rushing through traffic to a destination or desperately seeking parking locations. Running along the streets, I have the opportunity to fly through the energy of Tacoma in a completely casual, enjoyable fashion. I get to see the city where I live in a way that I have never taken the time to appreciate before.

We jog across the Chihuly Bridge of Glass, and then along the waterfront. As we run by, people stop what they are doing and watch us pass as though we are part of a parade. Most smile and some wave, but I never see a single frustrated motorist or sour glare. Fun like this is contagious, and the spectators catch our exuberance and sense of freedom. We head back up another hill, onto a level street, and back to the bar. Run complete, we all take a moment to recover and then head indoors for libations and appetizers. This has been an awesome experience, one that I intend to repeat.

I had the opportunity to speak with Young, Cutting, and McNair-Huff following the run, and each reiterated the same astonishment at how successful the Tacoma Runners had become. Without charging membership or registration fees, the group depends on sponsorship and donations to cover their operational costs. Young describes their astonishment, “It’s an accidental success,” but explains that the reason for their growth is a simple one. “We created an all-welcoming environment for people of all speeds and all types to be here. We didn’t realize how special it was until we had friends from other parts of the country telling us they had nothing like it.”

McNair-Huff also reflects, “I think the reason we’ve succeeded is just that it’s fun – and that we’ve made it really easy for people to come out.” Cutting adds, “Every week there’s something fun to do.” Cutting also remarks that Tacoma Runners is a place to find “positive peer pressure.” It’s a running party that includes encouragement from friends to get out and run, and everyone is invited to attend.

For more information about Tacoma Runners or to find out where there next run will be, visit their website here.