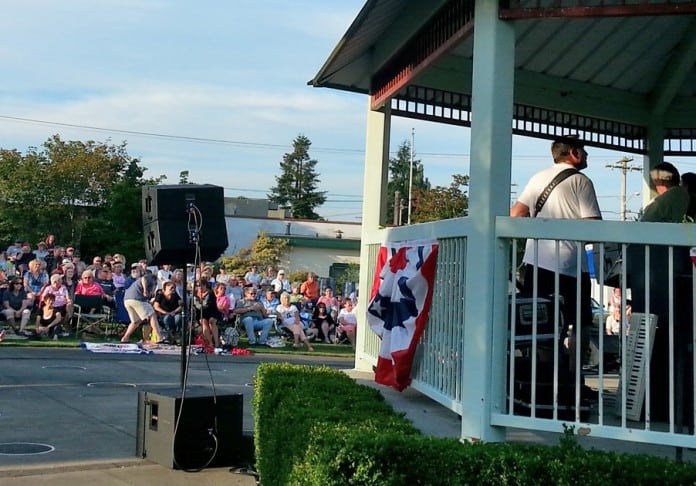 Something magical happens when hearing local talent on a sizzling afternoon under a cloudless sky or on a balmy summer’s night beneath a blanket of stars. Music seems to sound better outside, sound resonating crystal clear and beckoning to dancers of all ages.

Outdoor concert series have become synonymous with summer, and SouthSoundTalk has got your playlist right here. Best of all, all events in our comprehensive list are completely free to attend, meaning you can simply sit back and soak it up without spending a dime. So get out the lawn chairs and picnic blankets, South Sounders — this is going to be a good set.

In its first year, the City of Gig Harbor’s Summer Sounds event had about three to four bands in its lineup. Thirteen years later, the event has grown so much in popularity that as many as 10 bands have graced the city’s waterfront park, playing to more than 1,000 fans. What can we expect this year? The City of Gig Harbor will kick off its series with The Coats, back by popular demand, and both the young and young-at-heart can count on there being many danceable numbers. On consecutive Tuesdays from June 16 to August 18.

For its second year in a row, the café “offers a bridge to community life” with its concert series held at neighboring Old Town Park. Not only does the series promise two hours of live music every Wednesday at 6:00 p.m. from June 10 to August 26, but TREOS will also have specialty food items available for carry-out, encouraging picnicking whilst listening.

New to the scene this summer is (253) Draft Punk Festival. On June 20, The Swiss will be taking over the street in front of its pub, and setting up an outdoor stage for garage and punk acts. Performances by The Dignitaries, The Riffbrokers, Finger Guns, Stereo Creeps, Trees & Timber, Radio On, The Tom Price Desert Classic, The DT’s, and reunited ‘90s favorites, Squirt will round out the afternoon, and pours from 7 Seas, Harmon Brewing, Odd Otter, and more will be on tap.

All day long starting at noon on June 20. Outdoor stage in front of The Swiss Restaurant & Pub.

Jazz Under The Stars

Pacific Lutheran University’s annual concert series will be in its sixteenth season this summer, and is the university’s way of giving back to the community. Attendees are encouraged to come with lawn chairs and picnic food to settle in for free musical performances, no matter the weather. Jazz Under The Stars runs every Thursday from July 9 to August 13 starting at 7:00 p.m.

Music and Art in Wright Park

This one-day family friendly festival celebrates Tacoma’s past, present, and future in music, with some food trucks and art/crafts added into the mix. On the afternoon of August 8, Wright Park will be transformed with the sounds of 14 rock, alternative, pop, and punk bands.

The charming Curran Apple Orchard Park forms the backdrop for four bands, ranging from rock to blues, soul, and a whole lot more. Food will be available for purchase, or else dine picnic style with your nearest and dearest ‘neath the orchard’s grand trees. All events are on Thursday nights in July and August starting at 6:30 p.m.

On a sure to be sun-soaked Saturday in July, the City of Lakewood presents SummerFEST. In collaboration with public market and food vendors, classic car displays, and an interactive KidZone, is hours’ worth of entertainment. Nashville NW, Unified Culture, Richard Allen & The Louisiana Experience, Sway, and The Machine will all take to the main stage for a day to remember.

The weekend long block party started in 1939 to commemorate Puyallup’s first mayor, Ezra Manning Meeker. Today, big-band and other performers are spread across three stages, and the down-home vibe is alive and well. Meeker Days 2015 entertainment list can be found here.

Concerts in the Park

A shared meal outside. Family friendly tunes. Dancing like no one is watching. These are the stuff of memories, and the ingredients of Puyallup’s summer concert series. Here, the emphasis is on family and community. Visit http://www.cityofpuyallup.org/files/library/8572c853ec4456f1.pdf for the full entertainment schedule.

In the words of Carmen Palmer, Communications Director for the City of Sumner, “This is one of the events that really makes Sumner special, and whether you live here or not, you get to enjoy this slice of Americana.  It’s an ideal setting that’s easy to get to. We have dinner options from Dixie’s Home Cookin’, and everyone gets the chance to sit outside or even dance along to the music.” In its sixteenth year, Music Off Main will hosts its first Johnny Cash cover band along with The Tall Boys who usually play The Tractor Tavern in Ballard (come prepared to square dance!).