I adore the Puget Sound climate. My favorite rainclouds are the ones that sustain a steady shower. The tempo sets the soundtrack for a calm, tranquil gray afternoon. While I may prefer such conditions for cozy indoor days or solitary jogging or walking, these are not always the best conditions to take my two boys, both under the age of five, out to playgrounds or trails. On those rare golden sunny-day breaks, it is important to know which park I should select to enjoy dry walks, slides, and swings before the rain continues.

Wapato Park and Wapato Hills Park are very convenient for quick trips outdoors when the sun makes a brief appearance. Each is located near main streets and is easily accessible. Though the names are nearly identical, each offers different advantages while providing necessary respite from city life without actually having to leave the city.

Wapato Park, located on South Sheridan between South 64 and South 72 Streets, provides ample parking, which is particularly handy when unloading strollers, children, and pets. Paths surrounding a scenic lake are paved and feature generally level ground with the occasional gentle hill. Since the circumference of the lake is very near to a mile in length, the setting is ideal for a long walk or jog, with or without a stroller. While there is impressive landscaping and manicured lawns throughout the park, the trees and wild growth areas are abundant and lovely.

My boys and I make a visit to this park at least once a week. My three-year-old is captivated with the ducks and squirrels long enough for me to run their stroller around the lake a couple of times. My younger son is happy to relax and enjoy the ride. After sight-seeing with me, my boys burn off excess energy at the playground. Overlooking the lake, it offers two sets of slides and climbing structures as well as four swings.

The park also has picnic and barbeque areas, both covered and open-air. With the exception of one very short section of stairs and some side-paths graveled rather than paved, Wapato Park is very wheel-friendly. It is an outstanding location for children of all ages to play and relax. Add to that an extensive dog park with fenced areas for small and larger dogs to run leash-free, Wapato Park will set a pleasant background for a bright day in the woods while still close enough to home to warrant a quick trip into the sun before the rain returns.

Wapato Hills Park, located at 6231 South Wapato Street, is also an exquisite example of nature in the heart of suburban communities. Unfortunately, the parking may deter all but the most determined enthusiast. The Metro Parks website suggests acquiring a “no-fee parking permit that is valid for parking along the east side of Wapato Street.” If legal parking can be found, the trails and Skip and Laura Vaughn Playfield will more than make up for the effort.

The playground equipment includes swings, slides, and an impressive series of climbing-apparatus opportunities. There is also a level, paved path, amenable to dog walking and strollers, which surrounds the playfield and lawn. The Wapato Hills path is only about a quarter of the distance around as Wapato Park’s lake path, making it a more contained recreation area. From nearly all points on the main path and playfield, the park can be seen in its entirety. With basketball courts and a seasonal sprayground, this park is well suited to aerobic activity and sports for any age group.

While the main path may be perfect for easy striding, the trails leading away from the playground and toward the wildlife habitat area are much more challenging and not as accommodating to wheeled travel. The path beginning on Wapato Street meanders through woods and blackberry bushes, letting out on South 56th about a quarter to half mile later. Pavement almost immediately gives way to packed dirt and grass that is excellent for a trail run or nature walk.

On the South 64th side of the park, another less traveled path provides hills that I found taxing to brave with a stroller, yet still very rewarding. I think our adventure up this trail would be more aptly described as a ‘hike’ rather than as a ‘walk.’ The views are appealing and the atmosphere serene. The woods shelter a grass path that would be sublime as a cross-country running course. The trail splits and both branches eventually meet forming a loop. Thick and wild woodland growth insulates this forest refuge, belying the busy urban world just over the hill. Wapato Hills Park offers more extensive isolated trails than Wapato Park, but the playfield and playground equipment are still available. The only real downside to Wapato Hills Park is the parking difficulties.

It is enchanting to find such peaceful havens of nature in a busy urban environment such as South Tacoma. Both Wapato Park and Wapato Hills Park are local treasures that merit repeat visits.

The trips I make to these parks may keep my little ones from cabin fever during the rainiest months, but more importantly, I know I am instilling in them an appreciation for the natural beauty of the Puget Sound area. 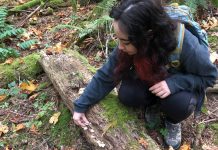 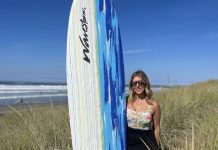