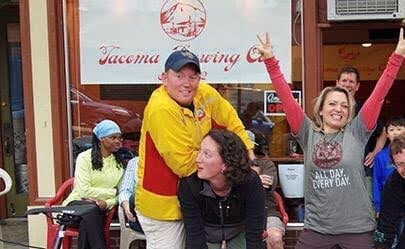 Fun fact: According to the American Enterprise Institute, “Compared to the low of only 89 US breweries in the late 1970s, there’s been a 2,750% increase in US breweries.” Reason being? The craft brewery scene has exploded, as seen locally in the City of Destiny.

Out of this love for the microbrew and with Downtown On the Go’s push for 2015 as the “Year of the Bike,” BikeroBrew (pronounced by-kroh-broo) has sprung up. The part beer crawl, part city bike tour, part social event, BikeroBrew is the brainchild of BikeroBrew Co-Owner Chris Stanis.

As Chris’ fellow Co-Owner, Jonathan Teeter, explains, “[Chris] had the idea one day after exploring downtown Tacoma on his bicycle. The concept came from getting out and exploring our own backyard, and what better way to do that than by bicycle and drinking beer.”

With BikeroBrew, cyclists and beer buffs pay a $45 registration fee to participate. The bike tour includes a five-mile loop with stop offs at four breweries and one distillery — Pacific Brewing and Malting Co., Tacoma Brewing Company, Odd Otter Brewing, Wingman Brewers and Old Soldier Distillery — the only distillery in Tacoma.

As Jonathan sums up the three-and-a-half to four-hour tour: “During the bike ride we give an offbeat history of downtown of pre and post-prohibition history while exploring and tasting local micro beers right here in Tacoma.”

This combination of biking and pours drew many during BikeroBrew’s inaugural May rides, including avid cyclist and craft brew connoisseur Alex Ropes. While Alex works at Pacific Brewing and Malting Co., even she found herself learning more about the brewery’s history and the city she calls home thanks to BikeroBrew.

Swag for Alex and her fellow biking buddies was comprised of a pint glass from Pacific Brewing and Malting Co. and Tacoma Brewing. Wingman and Odd Otter provided a few samples on the house, and during a stop in at Old Soldier Distillery, visitors were given a special tour where they tasted whisky and learned about the distilling process. Behind-the-scenes tours of Pacific Brewing and Malting Co. and Old Soldier rounded out the experience.

For Jonathan and Chris, biking and brew go hand-in-hand. “We figured that we really enjoy the ease of bike riding through downtown, especially for the free parking. In addition, we love drinking craft beer at the local breweries,” Jonathan said. “The scene of bicycle riding and going to breweries is huge in Tacoma, and still growing. We really wanted to capitalize on combining the experience of traversing the city and enjoying cold ones at the breweries.”

Alex, too, was sold on the blending of brewery and urban exploration. “I thought it was such a great idea — local beer and sustainable transport. I just loved being with other beer lovers riding through Tacoma enjoying a beautiful day together. I typically avoid Tacoma on my bike, and after the tour, I realized it was more bike friendly than I had originally thought.”

Local history enters in between the brewery pit stops. Downtown museums, UW Tacoma, Hotel Murano, Thea Foss Waterfront and other interesting sites are pointed out along the way, enhancing the experience while helping Tacomans grow more acquainted with the city they inhabit.

“Many people live in downtown’s vicinity, but they fail to explore some of the great things around. For example, did you know that there’s a telephone museum in downtown? Or that Hotel Murano was named after the Murano Island off of Italy’s coast to pay homage to the glass blowing community there?” Jonathan explained.

But, perhaps more than anything, BikeroBrew is about bringing people together in the name of two hobbies. As the tour company describes itself: “BikeroBrew has three key elements: celebrating craft brewing, urban exploration, and having a good time with friends.”

Alex drew the connection even before her first tour. “I saw the poster for the tour in Pacific Brewing and Malting Co.’s taproom and invited four of my friends to join as well. Having friends on the tour was great, but doing it alone would have been equally as fun because all of the tour participants were happy beer loving folks, too!”

If drinking, riding and exploring sounds right up your alley, consider registering for and upcoming tour. You must be at least 21 to participate.