South Tacoma Way is known for ubiquitous Asian fare in the form of a long string of pho and Korean barbecue joints, but T-Town Cafe has elevated Lakewood’s Asian offerings to an entirely new level.

Owners Chang and Jean Lee, who owned the cleverly named It’s Pho You restaurant at the same location, decided to introduce new Korean dishes to an area that obviously cannot get enough.

Known worldwide for pho and kimchi, Korean cuisine offers a much wider, and somewhat surprising variety of dishes – specifically desserts.

Combine traditional Korean desserts, innovative twists on Korean classics, and a warm and inviting atmosphere and you have T-Town Cafe.

The stars of the show here are definitely the snowflake and the ice cream taiyaki. Consider them as the two leads in a romantic saga of sweetness.

Let’s begin with the snowflake: a bowl of shaved ice with condensed milk, ice cream, and a myriad of topping choices from fresh fruit, to almonds to Nutella. A snowflake bowl is an enormous serving and more than enough to serve as a dessert for two to four people depending on their appetite and sweet tooth. T-Town also offers a smaller version for those who prefer good things in small packages.

It’s worth noting that the shaved ice in the snowflake dessert is not coarse like traditional shaved ice. It is light, fluffy and powdery, and a big hit with locals.

The second star in T-Town’s galaxy is the ice cream taiyaki. Imagine a waffle-like cone in the shape of a fish with its mouth gaping open, then imagine that said fish swallowed a bunch of Nutella and then followed that with ice cream and then some freshly sliced strawberries for good measure.

You can mix and match the filling, ice cream flavor, and toppings on the ice cream taiyaki, and believe us people do. We saw all kinds of combinations during our visit. The bottom line is that the dessert is delicious and whimsical – a downright pleasure to eat.

Aside from all the sweet sensations, T-Town also offers breakfast items, snacks, and plentiful salad and sandwich options.

The snacks and sandwiches are where creativity meets Korean tradition. Most people are familiar with bulgogi, thin slices of grilled or stir-fried beef or pork. In fact, bulgogi is immensely popular with Koreans and non-Koreans alike.

Well, the folks at T-Town realized that sandwiching bulgogi between two slices of bread would be a fantastic idea and lo and behold, the bulgogi sandwich is one of the restaurant’s most popular non-dessert dishes. The pork sandwich is another big hit with patrons.

You get a sense of Jean’s warmth as you behold the interior of T-Town, which she designed, and speak to her about her family and her culture. The restaurant is cozy, complete with plenty of wood and a palette of fall colors, plus a sofa, bench and faux fireplace. You definitely get the feeling that you can sit with loved ones for a couple of hours, enjoying a sandwich, then dessert and then perhaps coffee or tea.

“I wanted to spread awareness of Korean culture,” says Jean about closing the chapter on It’s Pho You and opening T-Town Cafe. “Everyone knows what pho is. I wanted to share more of the Korean experience with people.”

And as she talks about her son, Joon, the musician, who sometimes works at the restaurant; and her ability to play the saxophone; and how T-Town customers are encouraged to play the restaurant’s piano and often do; you’re pleased that she wants to share more of her culture with us. 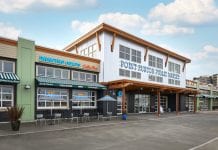 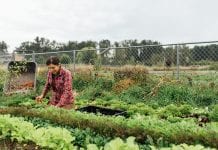