Shortly before seven o’clock p.m. on Monday, August 6, 1928, the city of Tacoma was rocked by a massive explosion. Hundreds of windows were shattered for miles around the Titlow Beach area, even as far east as Broadway Street.

The Tacoma Police Department and newspaper offices were swamped by calls from people desperate to find out what had happened. The police soon realized there had been an accident near Titlow Beach and since the explosion knocked out phone lines in the area, they dispatched motorcycle cops to investigate.

What alarmingly happened was the LaBlanca, a small transport ship, exploded just after rounding Cape Forswick on the Gig Harbor Peninsula. The ship left the DuPont Company Wharf in DuPont around 5:15 p.m. bringing a load of 260 cases of dynamite and 225 kegs of black powder destined for Kennydale on Lake Washington. Fortunately, no one was killed or seriously injured in the accident.

The LaBlanca was a gasoline scow owned and piloted by Niels Christensen, a Danish immigrant who regularly delivered explosives from DuPont to Seattle. He was operating the boat with his sixteen-year-old son Niels Junior. The boy had been helping him on the ship for about three or four years. It was his first accident, Niels Senior later admitted, “but it was enough to last any man for 20 years.”

After their narrow escape, the shaken father and son were interviewed by the Tacoma Ledger. Niels Senior described the accident:

“I was at the wheel piloting the boat and the boy was in the hold getting supper ready. Just before exiting, I went to take a look at the engine to see that everything was all right. And I saw the fire. I called to the boy that we’d have to get off. He wanted to fight the fire, but I wouldn’t let him. It had gotten out of hand and that I saw there was no chance of checking it….I knew that it was just a matter of minutes until the whole ship would go, but I calculated we could reach shore…. [He needed to get to shore before the fire reached the black powder]If there had not been a heavy tide we probably would not have made it. But I headed the boat in toward a little bay on the shore and the tide just swept us in….While I was guiding the boat my son saw that there were several boats heading toward us. They saw the fire and evidently planned to come to our rescue, but we knew that they were steering towards their own destruction. The boy shouted to them and waved and they turned back…. Just as we felt the boat grounding we jumped and ran with all the strength we had and managed to get more than 1,000 feet from shore before the explosion came. We were leaning over in the brush and scarcely felt the blast. The bank was between us and the vessel so none of the force reached us. . . .After the noise subsided we went back to where the boat had been but there wasn’t a trace of it, just oil on the water.”

About thirty people had gathered on Titlow Beach to watch and were nearly knocked off their feet by the blast. Panicked rumors started to fly about what had happened. One woman had seen at least five bodies hurled into the sky while a man had thought a large freighter had blown up.

Once the word was out about the accident, hundreds drove to the beach for a look. Traffic slowed to a crawl within two miles of Titlow Beach and took most of Tacoma traffic officers to untangle. Hundreds of small boats crossed the Narrows to offer aid and take a look.

The Christensens were picked up by a young boy with a rowboat before transferring to a troller. They arrived on Titlow Beach in a speedboat operated by Lock McLean of Day Island. Father and son stayed in Tacoma long enough to call Mrs. Christensen and get their picture taken at the Tacoma Ledger office before taking the bus to Seattle.

The explosion sent debris flying halfway across the Narrows and startled hundreds of seagulls into flight. It also started a fire on the bluff above destroying two homes that had already been badly wrecked by the explosion. Volunteer firefighters struggled to save two other nearby homes. With the aid of sixteen DuPont employees led by Chief Lester Munyan, they were able to bring the fire under control on Wednesday afternoon.

The cause of the fire remained unknown. Because it was so small, the LaBlanca had not been required to be licensed to carry explosives (or be inspected).  The federal government claimed the accident happened in state-owned tidelands, but the state claimed its jurisdiction ended after it had left the DuPont wharf.

Only a few years later, the Great Depression would devastate explosives manufacturing in DuPont. Company fortunes revived with World War II and better technology made explosives easier to transport. DuPont Company stopped operations in DuPont in 1977 but the community continues to thrive today.

Puget Sound Businesses Have Some Odd Ties to Animals 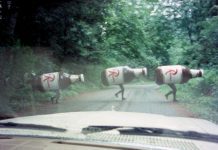 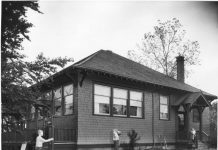