And not to be outdone, four sets of Magellanic penguins are nesting on eggs in their exhibit near the North Pacific Aquarium.

Next month could be Mothers’ May at the zoo in more than one regard.

Across zoo grounds, four pairs of prospective penguin parents are taking turns sitting on eggs that were laid between March 30 and April 13. One penguin pair has two eggs; the other three pair have one egg each. Male and female penguins share the nesting duties.

If the eggs are fertile, they would hatch in mid- to late May. Penguins can take 38 to 42 days to develop and emerge from their eggs.

All four of the females would be first-time moms.

Three of them arrived at Point Defiance Zoo in 2011 from a rehabilitation facility in Brazil. They could not be released back into the wild. The fourth female was hatched at Blank Park Zoo in Iowa and arrived in Tacoma in 2010. All of the penguin moms-in-waiting are 5 years old. Magellanic penguins are native to southern coastal regions of South America and can grow to about 27 inches high. The species is listed as “near threatened” by the International Union for Conservation of Nature.

Clouded leopards are listed as endangered by the US Fish and Wildlife Service and as vulnerable on the IUCN Red List of Threatened Species.

“We are delighted at the prospect of adding to the populations and genetic diversity of these two animal species,” Goodrowe Beck said. 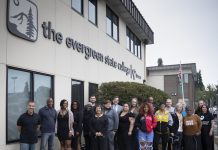