One of Grays Harbor’s most unique features is the many winding rivers that crisscross the county before eventually being dumped into the roaring Pacific Ocean. For centuries, bridges have been constructed all over the world using a variety of techniques, many of which can be found here in both footbridge and drivable form and each has a unique history of their own. If you’re interested in history, or simply awed by impressive construction, take a day trip to Grays Harbor and explore the area’s many scenic bridges.

Nearing its 100th birthday, the Wishkah River Bridge is one of the oldest still in regular operation in Grays Harbor County. The bridge’s opening year of 1925 coincides with the first fully electric house in Aberdeen and is a classic example of the Strauss heel-trunnion bascule bridge. The single-leaf drawbridge design was invented and patented by the Chicago-based Joseph Baermann Strauss who was one of the prominent bridge engineers of the early twentieth century. Being nearly a century old, the bridge needed repairs and was successfully rehabilitated in 2003.

Perhaps the most well-known bridge in Grays Harbor is the massive Chehalis River Bridge. First glimpses of this draw bridge can be spotted by drivers entering town from Central Park, especially when the bridge is open and vessels are gliding beneath in the waters below. The first concrete was poured for the Chehalis River Bridge on August 19, 1953, before its completion in 1955. This bridge is a Warren deck truss bascule bridge and is eligible to be placed on the National Register of Historic Places.

Positioned in North Aberdeen, the Young Street Bridge stretches over a portion of the Wishkah River. While the 1950s bridge itself isn’t notably historic, the area had its claim to fame after numerous accounts of Kurt Cobain, former Nirvana frontman, once used the area as a temporary home in his youth while growing up in Aberdeen. This area is hinted at in the song, “Something in the Way” and now serves as a memorial park for visitors to pay tribute to the grunge music legend.

Located on the campus of Grays Harbor College (GHC), Lake Swano trail in the Alder Creek watershed is a fantastic hike suitable for all ages. The lake itself was created in the 1940s after Mr. Swano Katalinich, owner and operator of a gravel pit along the creek, built a dam. In 1962, GHC purchased the lake and began work on the trail development. After the John M. Smith Aquaculture Center was constructed in 1987, the first trail was developed and installed for interpreting fish habitat. Soon after, a loop trail was completed around the lake along with a footbridge to take visitors safely around the area.

Built 1949 and dedicated on June 24, 1950, the Heron Street Bridge is a major east-west transportation route through Aberdeen. The Washington State Department of Transportation (WSDOT) tallies around 14,000 daily trips across the bridge positioned just above the Wishkah River, made famous by Nirvana’s “From the Muddy Banks of the Wishkah.” This bridge is a moveable span bridge and was built by Roy T. Earley Construction Company based in Tacoma. Currently, the WSDOT is planning to make needed repairs or reconstruct the aging bridge in the coming years.

The 465-foot-long, US 101 Hoquiam River Riverside Bridge was constructed in 1970. This bridge spans the Hoquiam River where the construction of a lumber mill occurred in 1885, kickstarting local logging operations. History tells a tale from the days of the logging industry declined when the crisis came to a head in the early 1990s as the northern spotted owl was placed on the threatened species list, leading to the suspension of all logging on old-growth timberlands. As a result, on April 28, 1990, roughly 1,500 timber industry supporters blockaded the Riverside Bridge, the only paved route west to the beaches and north along the west coast of the Olympic Peninsula. Today, this moveable bridge has been placed on the National Register of Historic Places.

The majority of the early to late 1900s in Grays Harbor was dedicated to feeding the timber demand across the American West and around the globe. In 1928, the Simpson Avenue Bridge was opened to match the need of traffic in the area. The bridge, totaling in at 1,980 feet, is created from timber, steel and concrete and consistently carries roughly 15,000 vehicles per day. The center of the bridge features a Strauss, double-leaf bascule with its signature 400,000 pounds underneath counterweights at each leaf resulting in an easy opening in less than six minutes. After the design became problematic at the turn of the century, WSDOT was able to preserve the bridge and keep it functioning in the 21st century.

Lace up your hiking boots for the journey to Quinault’s Pony Bridge. Totaling in at just under five miles, this hike weaves through towering trees and greenery. Upon arrival at the short footbridge, cross over a deep chasm of the blue and green Quinault River below and marvel at the views of swaying trees from the top. Steep paths on the side of the river bring visitors to the rocky sandbar below and provide a fantastic look at the hand-built bridge above.

Lake Sylvia State Park, nestled in the woods just outside of the Montesano city center, this park has a deep history throughout the 252-acres making a visit as much of a history lesson as a day out in nature. The area was originally homesteaded in 1868 where a water-powered sawmill was constructed. Shortly after 1900, a small hydroelectric dam was built that provided water and electricity for the growing city and logging camp before a more modern mill was built. Today, visitors can hike around the scenic lake and surrounding area and discover remnants of the past, including large old saw blades, railroad structures, various footbridges and a quaint small, covered bridge.

This large bridge in Montesano was built in 1958 and is a warren through truss design. While crossing the bridge, drivers are offered fantastic views of the Chehalis River below that’s often dotted with fishermen from the nearby boat launch. Recently, a massive restoration project was completed giving the bridge more support to withstand many more years to come.

Noted in The Daily World in October of 1967 as being the only covered bridge in Grays Harbor, the covered bridge at Schafer Farm remains a piece of history. Painfully constructed by Aberdeen’s Oscar Hegberg, the head carpenter also produced other impressive structures on the 1,600-acre ranch up the Satsop valley. Each stick of wood in the span, which totals 16 feet wide and 72 feet long, is cedar harvested from massive timbers and fabricated by the E.D. Miller Cedar Lumber Company to small boards. Today, the bridge and historic property stand as a testament to the booming timber days of Grays Harbor.

While many bridges in Grays Harbor are still in use or have been reconstructed completely over the years, one that remains in a derelict state is the STC- Middle Fork Satstop River Bridge. Built in the 1920s, this relict from a bygone era was abandoned in the 1950s after being used by the Simpson Railroad which is currently the last logging railroad to operate in the United States. 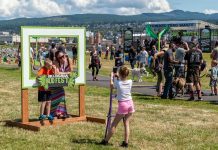 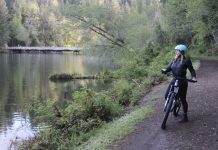 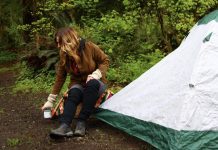